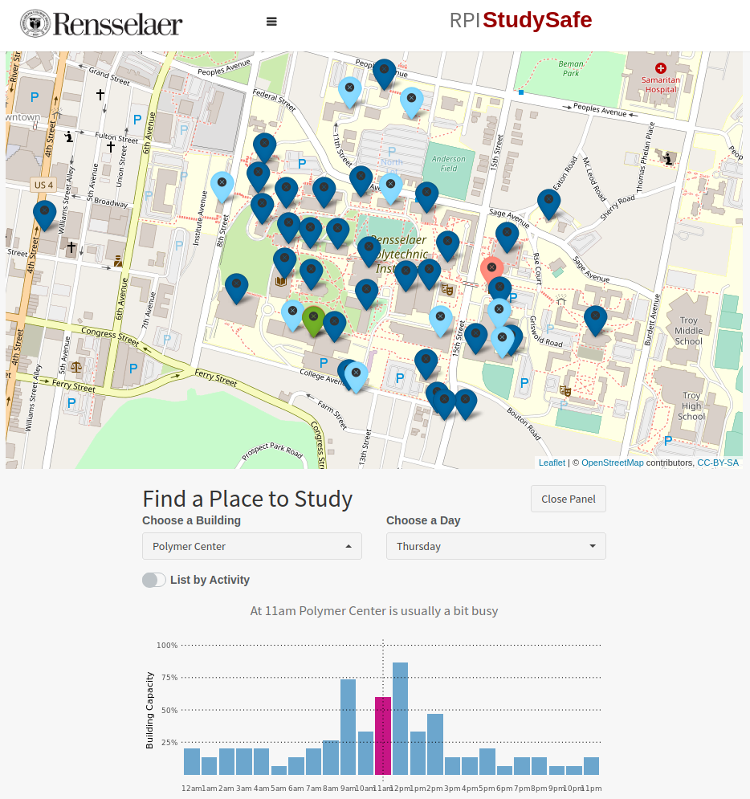 StudySafe allows users to see how crowded buildings are likely to be at any time on any day
Using near-real-time, anonymous WiFi data from more than 1300 wireless access points on campus, the RPI StudySafe app helps the RPI community easily identify crowded and open spots around campus.

The RPI StudySafe app reveals the population and density of wireless users in locations across the Rensselaer Polytechnic Institute campus by monitoring near-real-time, fully anonymized WiFi access data. Data analysis and visualizations were created by students and staff of the The Rensselaer Institute for Data Exploration and Applications (IDEA) and was one of several COVID-19-related projects conducted by the Rensselaer IDEA's Data INCITE program during the Summer and Fall of 2020, with work continuing through 2021. See https://inciteprojects.idea.rpi.edu/studysafe/app/studysafe

StudySafe uses aggregated wireless access point (WAP) data to help on-campus users make informed decisions on where they might go for extended periods of time on campus. Users can explore the data in several ways, including by selecting certain days, times, locations, and through interactive campus maps. The Campus network management team surveys more than 1300 access points twice hourly, and the StudySafe app updates its analysis every two hours. For the curious, StudySafe is engineered for campus-scale deployment, adopting ShinyProxy and Docker containers.

Work has continued on StudySafe during 2021; users are encouraged to access the app's feedback form to report bugs and offer suggestions.

More information about Data INCITE's COVID-19 work during 2020 can be found at: https://idea.rpi.edu/research/projects/data-incite

We are always looking for student volunteers to contribute to this work! Our github repository can be found at: https://github.rpi.edu/DataINCITE/IDEA-COVID-StudySafe