There are now thousands of online social and commercial platforms available on the web. Yet, many of these face specific challenges causes by malicious actors such as trolls on Slashdot and Twitter, bots on Twitter, vandals on Wikipedia, sockpuppets in online discussion forums, and review fraud on e-commerce sites. In this talk, I will quickly provide some examples of the challenges caused by such malicious actors and then focus on two specific case studies. The first case study will describe both supervised and unsupervised methods to identify review fraud on e-commerce sites – using data from Amazon and Flipkart, we show that we can accurately identify review fraud. The second case study will describe methods to identify sock- puppets in online discussion forums. The talk will conclude with a brief discussion of other malicious actors. 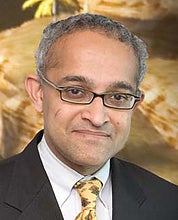 V.S. Subrahmanian is Professor of Computer Science at the University of Maryland and heads the Center for Digital International Government, having previously served as Director of the University of Maryland's Institute for Advanced Computer Studies. Prof. Subrahmanian is an expert on big data analytics including methods to analyze text/geospatial/relational/social network data, learn behavioral models from the data, forecast actions, and influence behaviors. He has written five books, edited six, and published over 250 articles. He is a Fellow of the American Association for the Advancement of Science and the Association for the Advancement of Artificial Intelligence. His work has been featured in numerous outlets such as the Baltimore Sun, the Economist, Science, Nature, the Washington Post, American Public Media. He serves on the editorial boards of numerous journals including Science as well as several ACM/IEEE journals, the Board of Directors of the Development Gateway Foundation (set up by the World Bank), SentiMetrix, Inc., and on the Research Advisory Board of Tata Consultancy Services. He previously served on DARPA's Executive Advisory Council on Advanced Logistics and as an ad-hoc member of the US Air Force Science Advisory Board (2001). He served thrice on the US-India Strategic Dialog (track 2).