A Multidimensional Immersive Exploration Environment for the #BlackLivesMatter TwitterSphere 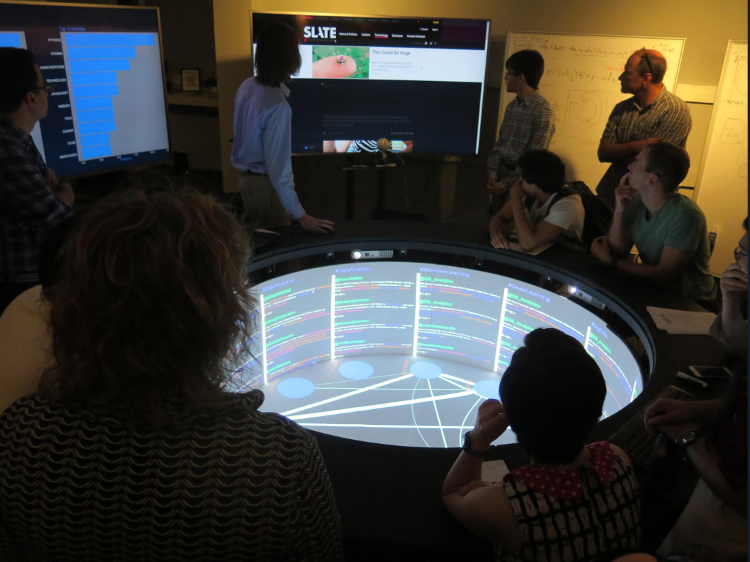 TTM runs on the Rensselaer IDEA Campfire, a multi-user, collaborative, immersive computing interface. The Campfire is a desk-height, 10-foot panoramic screen (the Wall) and floor projection (Floor) that users gather around and look into, maintaining contact with one another with no artificial or virtual barriers between themselves as they observe and engage with presentations and applications. Two large monitors adjacent to the Campfire complement the integrated Wall and Floor visualizations with appropriate content, enabling investigators to be fully immersed in their exploratory tasks.

Twitter Time Machine utilizes a corpus of over 250GB of Twitter data based on curated lists of Tweet IDs identified by the BTH research for the years 2014-2015 and from Internet Archive curation (2016-2017). In-depth exploration is provided for nine time periods (2014-2015)  identified by the BTH research and additional periods in 2016 based on events the BLM movement was known to have responded to. The "re-hydrated" Twitter data was stored in a private Elasticsearch document database instance hosted on the IDEA compute cluster; queries into the Elasticsearch-hosted corpus originated directly from the R environment using the elasticsearchr R package